Much Ado About Almost Nothing: the role of thin film growth in MEMS architectures 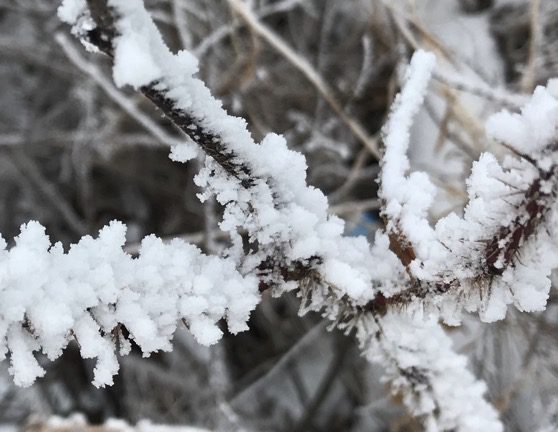 As I go through some pictures of recent hikes, I remembered that one striking feature of a winter’s day hike was the growth of frost on the branches of trees and bushes in a clearing. The frost film’s growth depended on the directionality and density of the flux of film growth media (a damp breeze coming in off of an open area), the thermal characteristics of the substrate, and the adatom mobility on the substrate itself. If the branch was too large, it retained enough thermal energy to not be cooled to condensation temperatures. Every branch was only coated on the wind 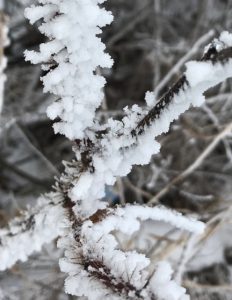 ward side, and the thinnest branches accumulated the largest thickness which inevitably became crystalline with low density and high complexity. Optimally sized branches maintained enough balance of thermal mass to the input thermodynamics to form dense coatings, while the diminishingly small substrates, such as spider’s webs, would collapse under the weight of the accumulated film.

The blog title could be applied to any nanoscale or high vacuum based industry, but the delicate balance reminded me of the same mechanisms involved in the fabrication of virtually all MEMS devices. The final structure scale dwarfs the constituent film contribution, but would be impossible without the careful control of these mechanisms to achieve the desired effects.

Thin films are fairly familiar yet rarely considered in everyday items, from the anti-reflection and other coatings on eyeglasses and sunglasses, to coatings on food containers and of course all the way to the highly complex layers of semiconductors, insulators and conductors which make up the sensors, displays and brains of the computers we use daily.

MEMS thin films have their own unique challenges. Structurally, most MEMS have moving parts, but even the simplest structures of basic flow channels require thin film approaches to masking and etching the desired features.

First, a simple case of a thin film humidity sensor can be used as an example. The figure below shows an electrode structure which consists of a metal adhesion layer and conduction layer together less than 1000 Angstroms in thickness, planarized into the dielectric silicon dioxide film, followed by a high porosity film to allow the humidity to penetrate in and change the dielectric constant of the film. The electrodes needed to be planar to allow the growth of the subsequent porous film to be of consistent porosity, much like the branch example. When executed correctly with 1000 electrode arrays, the sensor itself is sensitive to a wide humidity range with sub second response times. The films used to make these devices include thermal oxidation, sputtered thin films, PECVD (Plasma Enhanced Chemical Vapour Deposition) layers, and evaporated structured thin films. All these different methods share common nucleation and growth laws which are exploited to provide dense layers when needed, and the porous final structure.

GLAD (Glancing Angle Deposition)  films can be made in a variety of configurations and directions, purely by changing incident angle, and is possible to do with a wide variety of materials. 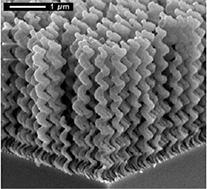 Micralyne has been using this background to develop thin film based devices for many decades. The short list of thin film processes supported at Micralyne can be found here.

Fundamental patents on the GLAD technology were sponsored research done in Micralyne’s original labs. We continue to build on this expertise, and a significant number of our key technical managers have gained their Ph.D.s from this program.

Micralyne continues to develop film growth methods and optimize film characteristics for a variety of final applications. While the capabilities list gives some insight into the tool sets, the devices which can be realized through understanding of the film growth mechanisms is impressive.

Fundamental knowledge of the building blocks of MEMS leads to a firm foundation on which to build our customer’s devices. One good example is our MOx platform of a low stress heater membrane suspended for thermal isolation inside of a cavity. Further details on our MOx platform is available here.

« What little (devices) I remember: the genesis of MEMS design and development in Alberta, Canada
Blog Index
Surface to Air and Everywhere – Big Problems in a Small World »