Surface to Air and Everywhere – Big Problems in a Small World 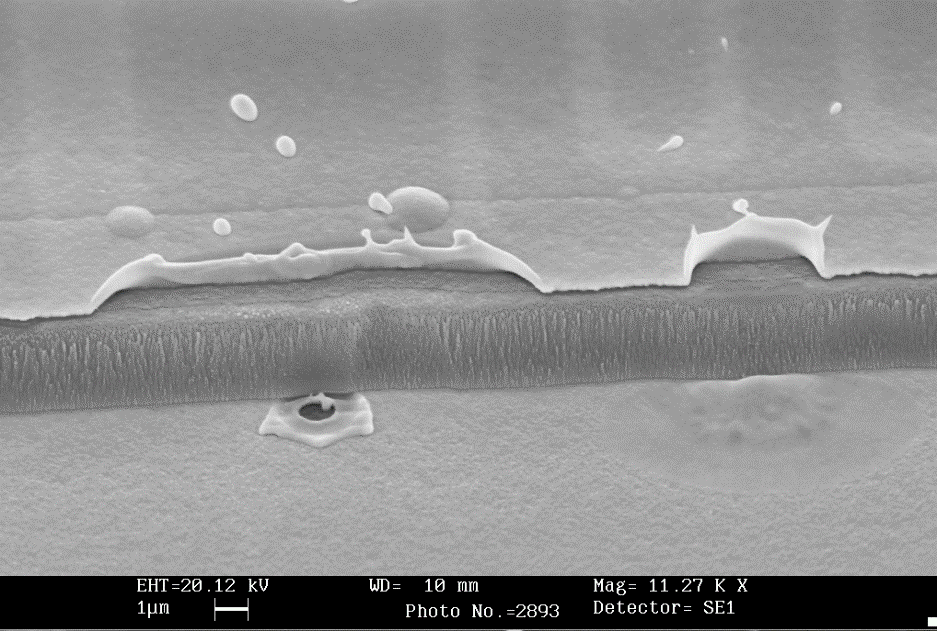 MEMS (MicroElectroMechanical Systems) geometries, measured usually in microns, don’t sound too imposingly small when compared to integrated circuit geometries, but ICs have one saving grace, which is that the electronic structure is completely encased in highly controlled dielectric films.

The slightly larger featured world of MEMS involves interfacing between these circuits and the outside world, as a sensor, actuator or both.  As such, there are often moving parts, and more importantly, surfaces open to air which can have unwanted interactions with the intended operation as designed.  The small distances between electrodes can generate large field strengths when seemingly small voltages are applied. 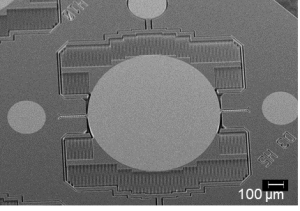 What I’m going to show is a series of failure modes which are pretty gory, so if explosions on the micron scale are disturbing to you, please discontinue reading.  It should also be noted that this is a “worst of” showcase, so while these are cautionary notes on what can go wrong, the learnings from these issues continued to drive development towards more rugged and controllable structures and processes.

Having been through some of these issues has made Micralyne process and development staff wary of potential failure modes and the present standard process suite at Micralyne has been designed to eliminate these issues.  Still, nostalgically speaking, writing this was a trip down a scary memory lane.

Let’s look at the first culprit, polymer on sidewalls of etched features after RIE (Reactive Ion Etching) or Deep RIE (DRIE).  In these cases, the polymer from the fluorine compounds in the plasmacoat the sidewall of the feature as it is etched. Removal of this material is an exacting science as well as an art. Different processes leave different types of polymers, and there is no one single way to deal with it (still on that quest). Figure 2 is a cross section of a fairly complicated topographical electrode system; the bright lines on the perimeter are different metal electrode layers.

The vertically etched sections are formed with RIE, and the intervening layer is an insulating silicon dioxide layer. Differing etch reactor conditions over the course of usage turned out to form slightly different polymer configurations, so a standard polymer removal process would sometimes fail to completely remove the material. No signs of the material could be observed with any simple method, as the sidewall polymer is so thin and follows the contours of the sidewall exactly. Figure 3 is an image of a sidewall after a very brief exposure to liquid etchants which attack the silicon dioxide. The penetrated polymer now gums together like rubber cement cohering together. Images of polymer coated surfaces and fully polymer removed surfaces look identical at normal SEM operating conditions. 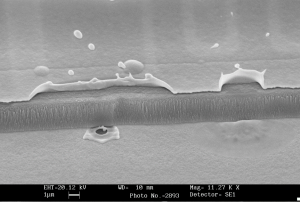 Figure 4. “Kerpow!” The cascade breakdown has melted metal in what looks like a still frame image mid-explosion.

This material can short out the two electrodes under some circumstances, even though it looks like an open circuit in DC measurements. Once the conduction path is initiated, an electron cascade forms and provides more and more current conduction paths, until the breakdown is complete and only ends when the material is completely removed. 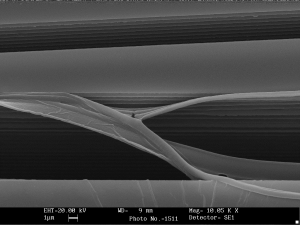 Figure 5. Crunchy on the inside, gooey on the outside. DRIE polymer starting to loosen off in a weak etch.

Let’s look at silicon DRIE polymer now. It too is difficult to see in SEM imaging. Surface analysis can frequently be misleading also. The funny thing is that it can be pretty thick compared to the structure size, but the uniformity and conformity of it means that it can’t be distinguished easily, but basically, having a mobile ionic species on what is supposed to be a conducting framework is never going to be the icing on the cake that it appears to be. Sometimes you can see through the edge of a polymer sheet in the SEM and it looks a bit like a Romulan ship decloaking, but that turns out to be impractical evaluation technique at best. Figure 5 is a picture of DRIE polymer loosened from a sidewall with a liquid etchant, just to show what is there prior to any attempt to remove it. The polymer on the comb finger in front has been loosened, and the one behind still has the polymer on it and they look fairly similar. Now we can look at a partially removed polymer that has been bombarded in an oxygen plasma in figure 6.  The combs are tightly spaced before removal for analysis, so it can be seen how deep the plasma can penetrate through the tight spacing.  In the above case, acceleration voltage of the SEM is 20 kV, but when turned down to 0.5 kV, the delicate polymer features can now be distinguished. 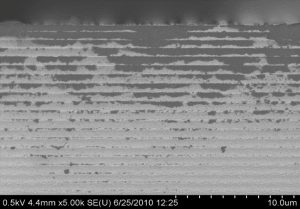 Figure 6. Not quite removed DRIE polymer which is starting to melt in a hot oxygen plasma.

Ok, enough about polymer. One of the main adhesion layers for our work in glass micromachining is chromium and chromium alloys. Chromium is a great material due to the adhesion properties and for the ability to cleanly etch a hard mask with it to allow glass etchants to preferentially remove material and form microchannels and complex topography. Figure 2 is partially made from glass micromachined structures, for instance. The complexities of completely removing the chromium however is enough to make one distain the material (sometimes called chromophobia) and not want to use it in an etch mask process.

Removing all of the chromium prior to beginning the glass etch process will influence the surface smoothness of the resulting glass feature. Etching the masked chromium film a single time in the appropriate etchant may result in clear looking openings under an optical microscope, but subtle interplay with the surface layer may result in material which micromasks the top surface and induces a roughness pattern which persists no matter how deep the etch is. Figure 7 below shows identical magnification of 40 kX, and the image on the right is properly residue free due to being pretreated prior to glass etching, while the image on the left shows how the surface is roughened by the residue on the surface even though it looked clear. The two sample sets are from adjacent points on the wafer, and the pretreatment is short, simple, and yet was a lot of effort to find that final cleaning method.

One device which we manufacture involves patterning alternating lines on a surface which has a voltage applied to them in final device operation. The surface is covered with a dielectric gel prior to actuation in order to prevent any air induced arcing phenomenon.While theoretically the distances involved between electrodes should be able to tolerate large voltages, for a brief, but not brief enough time period, single line pairs out of thousands would explode at a single point when actuated. No causal mechanism or observable differences in the local area could be determined. Hypothesis abounded and tests were instituted along with detailed pre-inspection criteria prior to final assembly. Finally, a correlation of failure to dielectric gel lot number appeared out of the noise. Contacting the manufacturer, they admitted yes, there were quality control issues with that lot, and as such, we were entitled to a free bottle of it. Minute contamination in it had seeded sites which would short allow electron transport much like the cascade shown in Figure 4, even though undetectable in DC measurements. Even when an order of magnitude more voltage was applied, no other sites would fail, just those which failed at low (but high frequency) voltage operation. The result was as shown below in Figure 8. 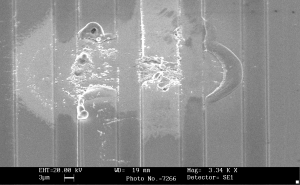 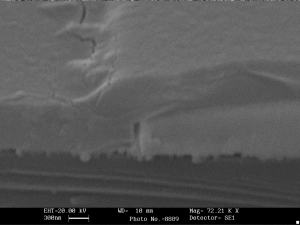 The last example isn’t so much of a surface and air interaction, just a reminder of scale. Micralyne was asked to look at making devices which were comprised of dielectric coated electrodes which had openings at specific sites for chemical analysis applications. Devices had been made at another fabrication facility without success, and while our devices were fairly robust, failures still happened where current would leak for no apparent reason. What is shown in Figure 9

is a crack along a metal line covered in dielectric. We took some parts in house to try our own tests, and failure could be induced simply by dipping the device in acid which had no etching interactions with any of the materials involved in the fabrication process. Only certain areas which comprised of different electrode traces would fail at the point where they came closest together. This was with no voltage induced other than that of the electropotential induced by battery like phenomenon between adjacent electrodes. By simply changing the layout to give greater spacing between lines, the failure mode disappeared, as it was not simply a matter of a process change; the small voltage generated still induced large enough local field strength in the micron spacing to force failure in a dielectric rated to be able to withstand at least a kilovolt of breakdown resistance in a static test.

So, we’ve seen a number of ways that surfaces of MEMS devices can be highly influenced by what would appear to be minor considerations on first analysis, and by thin veils of materials which are almost undetectable until final device fabrication and actuation. Only by understanding the nature of the surfaces and what processes influence the final surface condition can allow manufacturing of robust devices.

« Much Ado About Almost Nothing: the role of thin film growth in MEMS architectures
Blog Index